“ SET YOUR GOALS HIGH, AND DON'T STOP TILL YOU GET THERE. ”

SWIMOTION - Discover the Benefits of an Underwater Treadmill

Are you recovering from injury? Learning to swim? Or training for a triathlon?

We are delighted to share details of what our sponsorship partners Swimotion can offer. This is one of the only publicly accessible facilities of its type in the South East and offers a Performance Endless Pool, along with an underwater treadmill which helps the healing process, aids relaxation, improves strength and muscle recovery without straining them further. We put these claims to the test when a member of our Youth Football Club, Stef Reader and Committee Member, Rob Crocker, visited Swimotion’s purpose-built centre in Groombridge.

Stef is a keen sportsman, and blackbelt jujitsu practitioner.  He won gold at the Jujitsu National Masters in September 2018 and recently a silver at the British National Pro Jujitsu Championship in February 2019.  The Swimotion session was conducted by owner, Jon Yates who guided Stef through a programme on the underwater treadmill in a low-impact environment.

Stef’s 30-minute session started with work on his legs whilst chest-deep in warm water on the treadmill. Later, resistance dumbbells were added to increase his upper body strength and range of motion.

The verdict:  A thumbs up from Stef who found the work out enjoyable, yet challenging, whilst having minimal impact on his joints.

Did you know that a person’s weight is reduced by up to 80% while underwater?  This allows you to build up strength and stamina, while supporting your joints and muscles.

Underwater treadmills first came to our attention during the build up to the London 2012 Olympics.  British triathlete Alistair Brownlee installed a pool with a treadmill in his home to speed up his recovery from a torn Achilles’ tendon, just months before the Games.

Having access to an excessive pool enabled him to regain his fitness levels quickly - after weeks of being away from running and cycling - to win an Olympic gold medal.  He told the Guardian newspaper: “I spent three weeks in a cast and another week when I couldn’t ride a bike.  So it was a month without cycling.  The pool made a huge difference”.

“Trying to get back to competitive sprinting from a broken foot after having surgery is no easy task at the best of times - let alone with a time frame of about three months.  I was able to start walking and the running sessions underwater about 6 weeks before I was able to do them on hard ground, which obviously made an enormous difference.  The work I was able to put in there, from not only a rehab perspective but also in terms of developing my cardiovascular and muscle strength was amazing.  I have probably come out stronger than before.  I would definitely recommend it to anyone wanting to enhance a rehab programme or develop their training.” 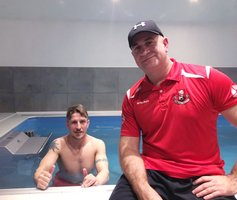